Alzheimer’s disease is the most common cause of dementia, but it is not easily treatable. One potential therapy is deep brain stimulation delivered by a kind of pacemaker.

A team of researchers at Charité – Universitätsmedizin Berlin has found that stimulating a specific network in the brain of Alzheimer’s patients reduces their symptoms.

The researchers hope the findings, which appear in Nature Communications, will pave the way for further studies.

Deep brain stimulation (DBS) is a form of therapy that is already approved in Germany for treating neurological movement disorders such as Parkinson’s disease and dystonia, and neuropsychiatric diseases such as obsessive-compulsive disorder. Very thin electrodes are implanted in the patient’s brain and constantly deliver mild electrical pulses to a specific region.

The electrodes remain in the brain permanently and are connected via wires that run under the skin to a pacemaker-like device implanted in the chest area. The device is used to adjust the strength and frequency of the electrical stimulation.

“Although DBS has been an established treatment for Parkinson’s disease for a good 20 years now, and the costs are covered by health insurance providers, it’s still not a very well-known therapy,” says Prof. Andreas Horn, head of a lab that explores network-based brain stimulation at the Department of Neurology and Experimental Neurology at Campus Charité Mitte, and at Brigham and Women’s Hospital and Massachusetts General Hospital, both affiliates of Harvard Medical School in Boston, USA.

“DBS works very well in patients with Parkinson’s,” he says. “It improves their quality of life significantly.”

Since Alzheimer’s is also a neurodegenerative disease, it seems likely that DBS could be used to treat this condition, too. But safe, effective treatment is only possible if the precise brain regions that require stimulation are known.

The starting point for the current study, which the researchers carried out in close cooperation with multiple partners including the University of Toronto in Canada, was a random observation made within a Canadian study.

“In one patient, who was being treated for obesity, deep brain stimulation caused flashbacks – sudden memories of their childhood and adolescence,” says Dr. Ana Sofía Ríos from the Department of Neurology and Experimental Neurology at Campus Charité Mitte, and the study’s lead author.

“This led the Canadian researchers to suspect that stimulating this brain region, which was located in the fornix, might also be suitable for treating Alzheimer’s.”

To investigate this further, researchers working at seven international centers as part of a multicenter study implanted electrodes in the same area of the fornix in participants with mild Alzheimer’s disease.

“Unfortunately, most patients showed no improvement in their symptoms. But a handful of participants benefited considerably from the treatment,” says Dr. Ríos.

“In the present study, we wanted to find the root cause of these differences, so we compared the exact position of the electrodes in each participant.”

Prof. Horn’s research group has specialized in analyzing high-resolution magnetic resonance images of the brain and combining these with computer models to precisely pinpoint the optimal locations for DBS.

“One of the main challenges is that every brain is different – and that’s really important for accurately planting the electrodes,” says Prof. Horn.

“When electrodes are placed even a few millimeters off target, it could lead to a lack of benefit for the patient.” 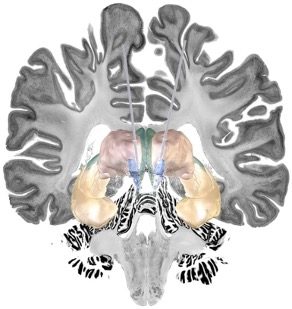 In persons with Alzheimer’s disease, the largest positive effect has been observed when stimulating the region between the fornix (green) and the bed nucleus of the stria terminalis (blue). Also shown are two brain structures – the thalamus (pink) and the hippocampus (yellow) – as well as the stimulation electrodes. Credit: Charité | Ana Sofía Ríos

This was what happened for most of the study participants. But Prof. Horn and his team were able to use imaging data to determine the exact position of the electrodes in the patients that profited from the procedure.

“The optimal stimulation site seems to be the intersection of two fiber bundles – the fornix and stria terminalis – that connect regions deep in the brain. Both structures have been linked to memory function,” says Prof. Horn.

Further clinical studies are needed before DBS can be approved and used to treat Alzheimer’s disease. The present results are an important next step in the process.

“If our data make it possible to place electrodes more precisely in neurosurgical studies trialing DBS in Alzheimer’s patients, that would be fantastic,” says Prof. Horn.

“We desperately need an effective therapy that alleviates the symptoms of this disease – and DBS is very promising.”